@LASDJordan: What’s to investigate? Tammany Hall West, aka #LosAngeles has nothing to hide! This is Old Political Elites vs. the Newbies. #LACity #LATimes #LADailyNews #LASD #LAPD https://t.co/DFdZO0ZOEv
h J R
Home » Five Year Old Attacked by Mountain Lion in Calabasas Leads to Action by Department of Fish and Wildlife 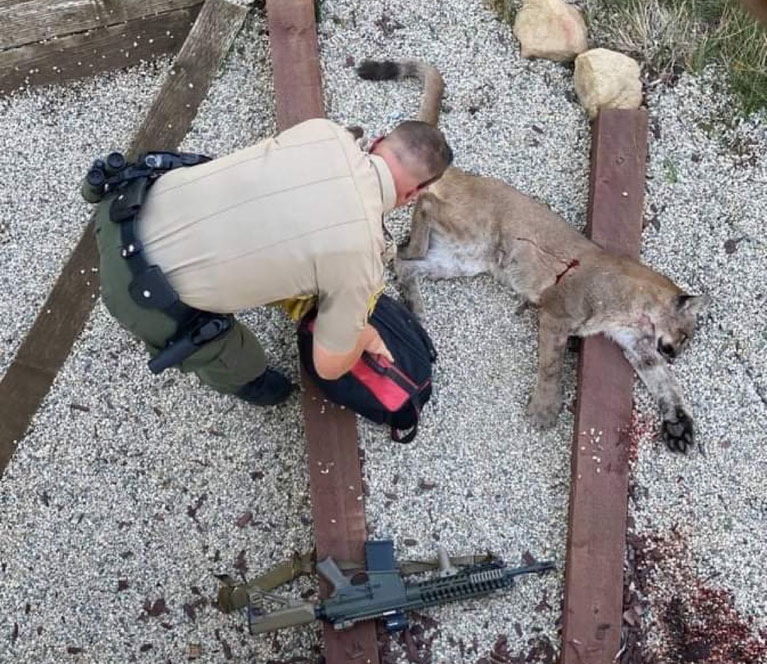 On Friday, August 27th, 2021, a photo was circulated on social media of an officer crouched over a deceased mountain lion, shot through the heart with a high powered rifle. The photo went viral causing an uproar on social media resulting in the following press release released by the Department of Fish and Wildlife, whose standard practice according to law enforcement sources, is not to make a statement regarding incidents such as the Calabasas attack. This is the first attack on a human by a mountain lion in over 25 years local news is reporting.

Pressure from the community and the photo of the dead mountain lion lead to DFW releasing pertinent details about the August 26th, 2021 incident yesterday, two days after the attack.

“The California Department of Fish and Wildlife (CDFW) confirmed that a mountain lion shot and killed by a wildlife officer was the one responsible for injuring a five-year-old boy Thursday near Calabasas in Los Angeles County. The boy is in stable condition.

On Aug 26, 2021, approximately 10:45 a.m., a 65-lb. mountain lion attacked the boy in his front yard, inflicting wounds to his head, neck and upper torso. The boy’s mother fended off the lion by striking it multiple times. The boy’s parents transported him to a hospital where he was treated for his injuries. He remains in the hospital in stable condition.

Upon learning of the attack, CDFW’s law enforcement division immediately began an investigation both interviewing the victim’s family in the hospital and visiting the scene of the attack. During a protocol clearing of the family’s yard, the wildlife officer at the home discovered an aggressive mountain lion crouched in the corner of the property. Due to its behavior and proximity to the attack, the warden believed it was likely the attacking lion and to protect public safety shot and killed it on site.

Approximately 20 minutes after he shot the mountain lion, two more mountain lions appeared. One was a full-grown adult with a radio collar around its neck. The other was a smaller mountain lion about the same 65-lb. size as the dispatched lion. After confirming with the boy’s mother that the attacking lion did not have a collar, the wildlife officer used a non-lethal tranquilizing rifle to capture the other non-collared lion.

DNA samples from the dispatched lion, the tranquilized lion and the child were collected and sent to CDFW’s Wildlife Forensics Laboratory in Sacramento. Wildlife Forensics Scientists analyzed samples from underneath the claws of the suspect lion carcass and isolated traces of human tissue and blood with a DNA profile that matched the young victim. Additionally, a full lion DNA profile was isolated from the victim’s shirt that matched the profile of the lion carcass. Results were conclusive that it was the attacking lion that was shot by the wildlife officer on scene. The second lion that was tranquilized was excluded from any profiles that would affiliate it with the attack.

After coordination with the National Park Service (NPS), the adult collared lion was identified as P-54, a female mountain lion who is part of an NPS mountain lion study. P-54 is known to have birthed cubs in October 2020 and has no known human-wildlife conflicts in her history. She was not captured and her collar reading showed she has since vacated the neighborhood.

In coordination with NPS, the non-offending tranquilized lion was collared and released in proximity to P-54 into the nearest suitable habitat.”