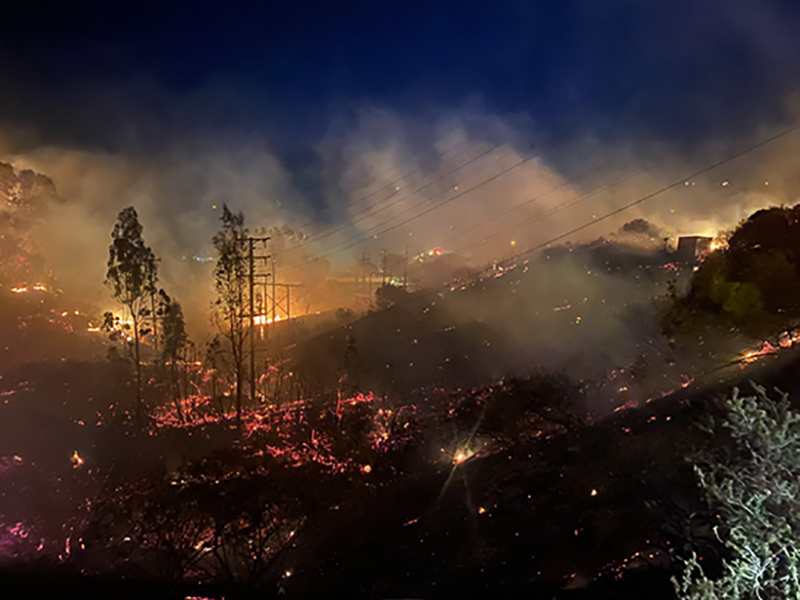 At approximately 4:24 a.m. on February 28th, a fire was reported in the Knolls areas of Malibu Canyon forcing evacuations of approximately 30 residents, road closures on PCH to Corral Canyon and from Mulholland on Las Virgenes/Malibu Canyon to PCH. Additionally, power outages caused traffics lights to malfunction.

The first known alert from the City of Malibu went out to residents at 5:17 a.m., 53 minutes after the fire with winds pushing flames towards residences. In the canyons, winds reached peaks of over 70 mph in the canyons.

While bother local Malibu media sources are reporting there was no evidence of a homeless encampment, Malibu resident Bruce Greenspan surveyed the area after the fire, provided photos of the charred landscape (below) and reported a tent, bottles, debris etc… suggesting at least one person spending time in the area during the last Santa Ana wind event.

“This is the area behind Webster Elementary. The hillside is scorched from Malibu Glass around to the back trails behind the Knolls. The fire was halted from burning Malibu Glass, Webster, and the first homes on the Knoll. That’s what I can see from this vantage point.

First, I can’t be more grateful and impressed with the surgical strike team that kept this fire from taking out Malibu Glass, Webster, and the homes on the Knoll, not to mention everything else down wind, including over 200 condos directly in the path. To see how the fire burned EVERYTHING up to, and around these buildings, including the new transformer station is a real testament to the skill and heroics of some bad-ass firefighters and fire jumping pilots.

Secondly, from my completely novice observations, It looks like the fire was hottest at what was the little walking bridge that went over the creek to the knolls back trails. Again, I have zero experience with anything to do with firefighting or investigating such matters, but it looks like it may have started there, as it’s the area with the darkest burn scars and damage. You can see on the picture, all that remains of the bridge are two completely burnt out beams.

Also, the areas burned seem to have branched out from this point in what looks like three different directions. 1-to the knolls backside hill, 2-towards Webster, and 3-around the hillside all the way to Malibu Glass. The pictures posted don’t make the branching out of the fire as I describe above clear, but it’s easier to see if you’re standing there.

Finally, in the debris where the bridge was, there are several bottles and cans. It seems obvious someone spent a lot of time there, probably sleeping there as this was also the same spot that I reported a homeless tent last month during the Santa Ana winds…“

The fire is currently under investigation however, early speculation per our sources at the Lost Hills Station indicate a high probability the cause will determined as arson.

This is a developing story.