@LASDJordan: What’s to investigate? Tammany Hall West, aka #LosAngeles has nothing to hide! This is Old Political Elites vs. the Newbies. #LACity #LATimes #LADailyNews #LASD #LAPD https://t.co/DFdZO0ZOEv
h J R
Home » What Does LA Democratic Party “No Consensus” Vote Endorsing Sheriff’s Candidate in 2022 Primary Tell Us? You’re On You’re Own (YOYO) Voters for the Most Important Role in Public Safety 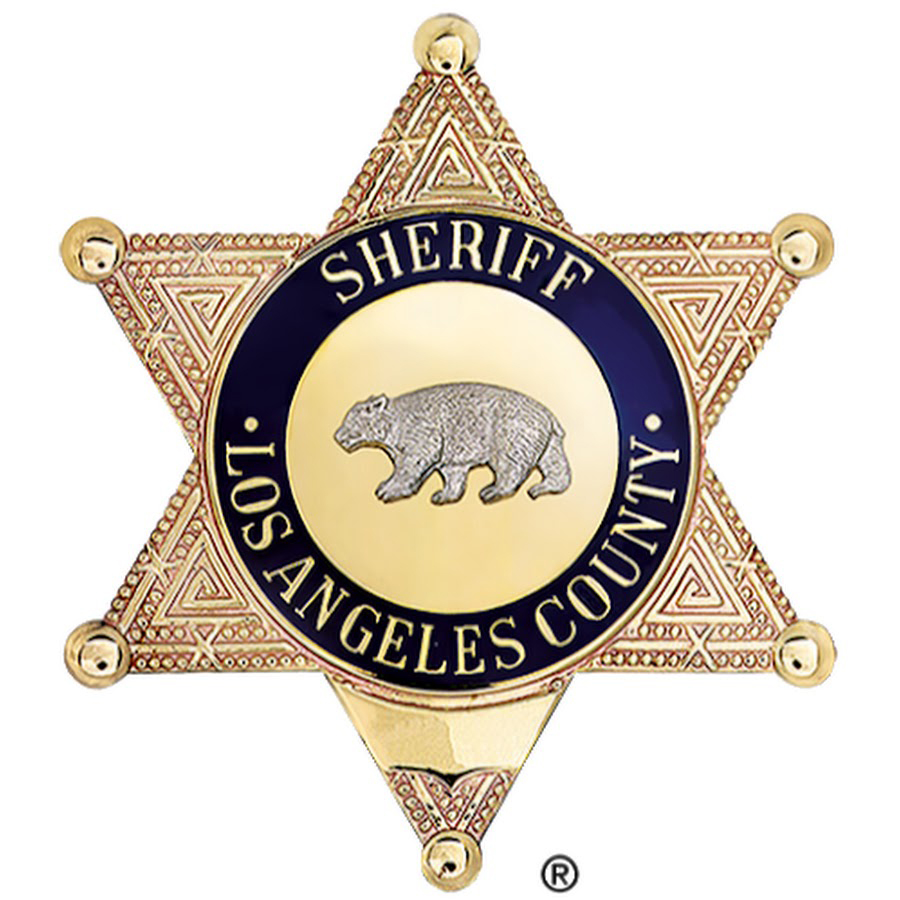 What Does LA Democratic Party “No Consensus” Vote Endorsing Sheriff’s Candidate in 2022 Primary Tell Us? You’re On You’re Own (YOYO) Voters for the Most Important Role in Public Safety

In the high-stakes race to be top cop of the largest Sheriff’s Department in the country, the L.A. Democratic Party  decided to take a pass on endorsing a candidate in the June primaries.

What does that mean for L.A.County voters looking for guidance in a time of skyrocketing violent crime and a steep decline in law enforcement presence (largely due to defunding and COVID mandates)?

Basically, YOYO – “you’re on your own” – says the Dems. It’s up to you to figure out who’s going to sink and whose going to swim in the shark infested waters of L.A. politics.

On January 11th, the contenders, including incumbent Sheriff Alex Villanueva, the Dems darling in the 2018 race, failed to reach the required 60% of the vote in order to secure the coveted endorsement leaving the party to take the position “no consensus”.

The “no consensus” position taken by the party leaves voters in a vulnerable position asking them to chose a candidate without the party’s guidance in the June primary.

The Current Report reached out to Drexel Heard, II Executive Director Los Angeles County Democratic Party who had this to say about the party’s decision:

“The Los Angeles Democratic Party has a position of “no consensus” in the race for LA County Sheriff through the June primary. In the event this race goes to a general election run-off, there will be a potential opportunity to take this race up again for endorsement consideration.”

In 2018, incumbent Sheriff AlexVillanueva running with a strong latino base, was endorsed by the LADCP which ultimately led to a stunning defeat against incumbent Jim McDonnell.

Fast forward to June 2021, LA Democrats were singing an entirely different tune formally calling on Villanueva to resign, accusing him of perpetrating “a culture of police brutality”. The resolution was passed by the party who endorsed Villanueva in 2018, receiving 91% of the vote.

Former Assistant Sheriff during the Baca administration and current LAX police chief Cecil Rhambo, secured numerous high profile democratic endorsements including outgoing Supervisor Sheila Kuehl and was positioning himself to secure the nomination fro the June primary with the Dem Party giving him the “recommendation” in December. 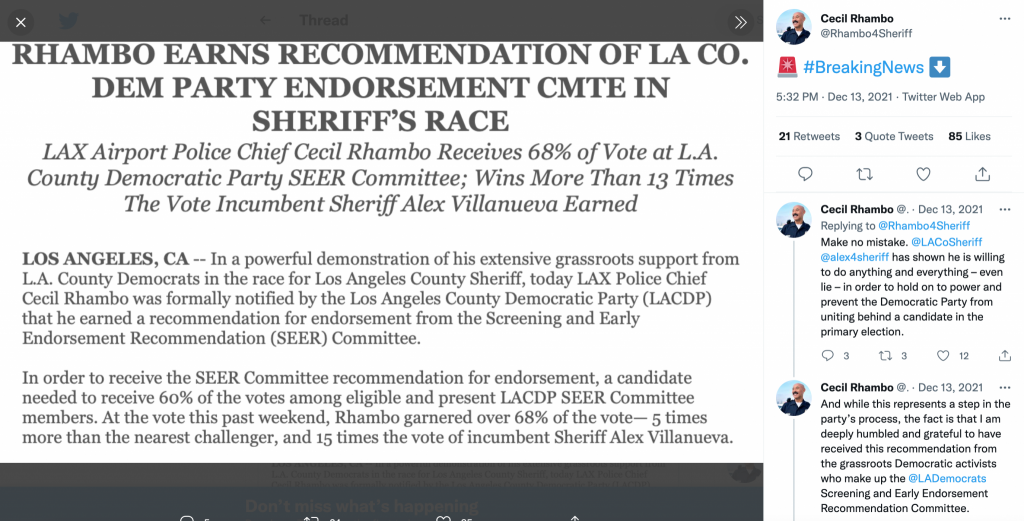 However, Rhambo’s questionable actions and ethics during and after his employment with the LA County Sheriff’s Department highlighted by journalist Cerise Castle was applauded by Democratic Party strategist Mike Trujillo. Castle brought to light significant information, that had it not been exposed, could have led to a Dem Party nod for Rhambo, potentially succeeding in the November run-off and a devastating tenure and the head of the largest Sheriff’s Department in the country, following in the footsteps of George Gascon’s brand of reform.

Thankfully as of now, it does not look like it’s going to happen. 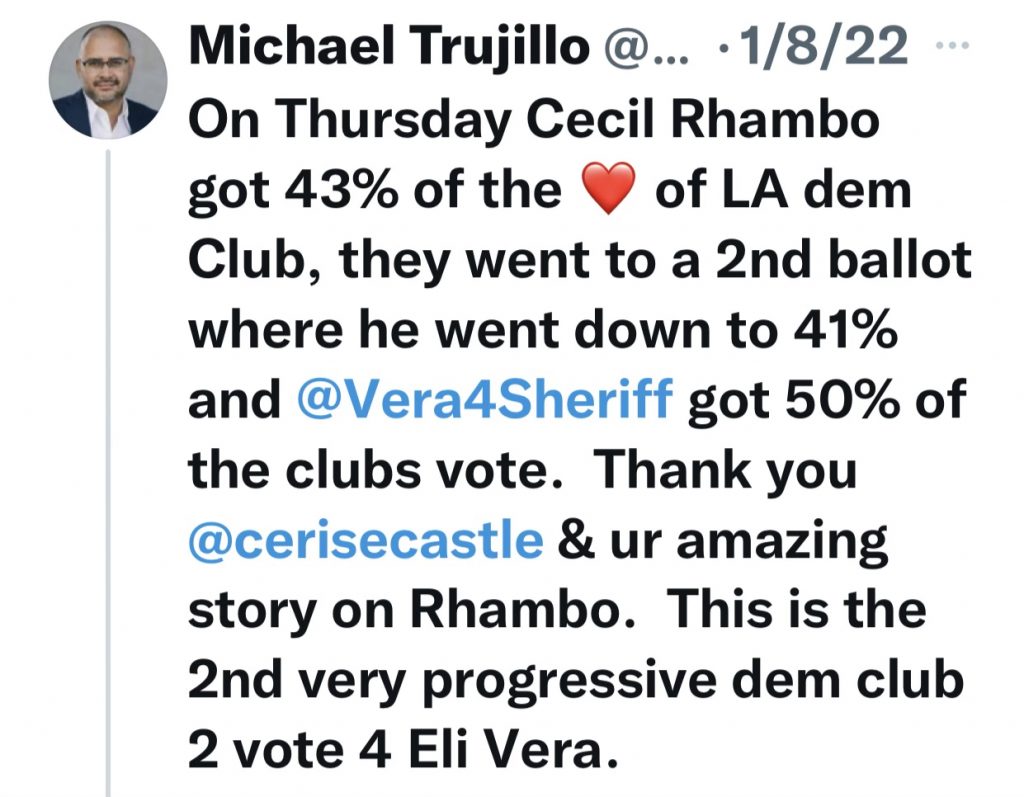 Just days before the final SEER Committee vote for the L.A. Democratic Party endorsement, candidate Matt Rodriguez emailed a total 501 voting delegates and their alternates voicing his concern over the Party’s potential endorsement of Rhambo.

” Dear LADCP Members,” Rodriguez began his plea, “As the critical vote on Tuesday for the endorsement of Cecil Rhambo rapidly approaches, I am compelled to share a few observations with you.  I’ll start with the obvious.

Cecil Rhambo was third in command during the most corrupt regime in the history of the Los Angeles County Sheriff’s Department… There is no bigger insider (into the corruption) in this race than Cecil Rhambo. He was the Assistant Sheriff in charge of the Custody Division while inmates were being brutalized. A preferred tactic was to shatter the inmate’s eye sockets with flashlights. Cecil failed to quell the violence, hence the Federal Bureau of Investigation’s (FBI) need to infiltrate the jails to expose a pattern and practice of violence and brutality.  Our federal partners did not trust Rhambo enough to notify him of their intentions. Ultimately, ten deputies were sentenced to federal prison.”

Rodriguez’s email continues on with Rhambo’s involvement with deputy gangs and the close relationship between Rhambo and former Undersheriff Paul Tanaka (friends since high school). Tanaka, a member of the deputy gang Lynwood Vikings, recently finished serving time in Federal prison for his role in the Baca scandal.

Rodriguez received multiple emails from delegates (and their alternates), including this email from Hans Johnson who appreciated the warning to “avert a disastrous, premature endorsement.” 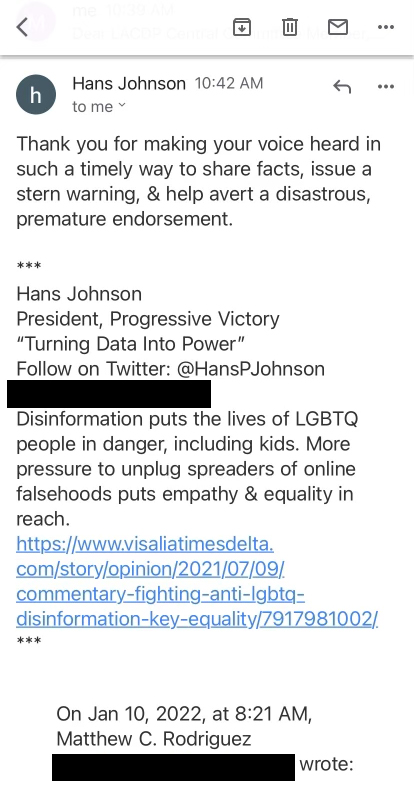 Shortly after the Dem Part announced the final “no consensus” vote, Rodriguez gave this statement to the The Current Report:

“After participating in the Screening and Early Endorsement Recommendation (SEER) process, I was contacted by delegates who told me they didn’t feel the process was fair or democratic. They felt as if Cecil Rhambo was pushed forward by a few people in the Democratic Party with personal agendas. I was compelled to expose the truth about Rhambo to the delegates. After I sent my letter I received numerous messages thanking me. The outcome of the vote spoke for itself. Rhambo received half of the votes needed to win the endorsement. I was pleased to see they delayed, did their due diligence and instead voted to endorse the right candidate after the primary. The ultimate goal of removing Alex Villanueva hasn’t changed. But replacing him with the right candidate best suited to lead the Sheriff’s Department has become the priority!!”

As of last week, millions of motorists throughout the County will see Sheriff’s candidate Rodriguez’s message on billboards in Lynwood, Compton, Carson and Hawthorne at SpaceX.

Rhambo’s rhetoric takes the same dangerous tone as Gascon’s did during his campaign which won him the position as DA in the 2020 election. Gascon’s pro-criminal directives have proved devastating to L.A. County with an astronomic rise in violent crime due to his promoting no-consequences for lawbreakers and repeat offenders and ZERO-COVID Bail.

It’s been a free for all for felons resulting in a severe blow to public safety in Los Angeles – and Rhambo will compound an already catastrophic situation for law enforcement.

As we approach critical debates such as the one hosted by the Sheriff’s union ALADS on Wednesday, an equally coveted endorsement, which along with it comes a significant donation to campaign coffers  – expect the mud to get a lot thicker – sparing no one.

For that matter…not even reporters! 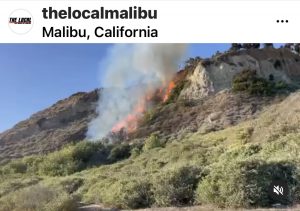